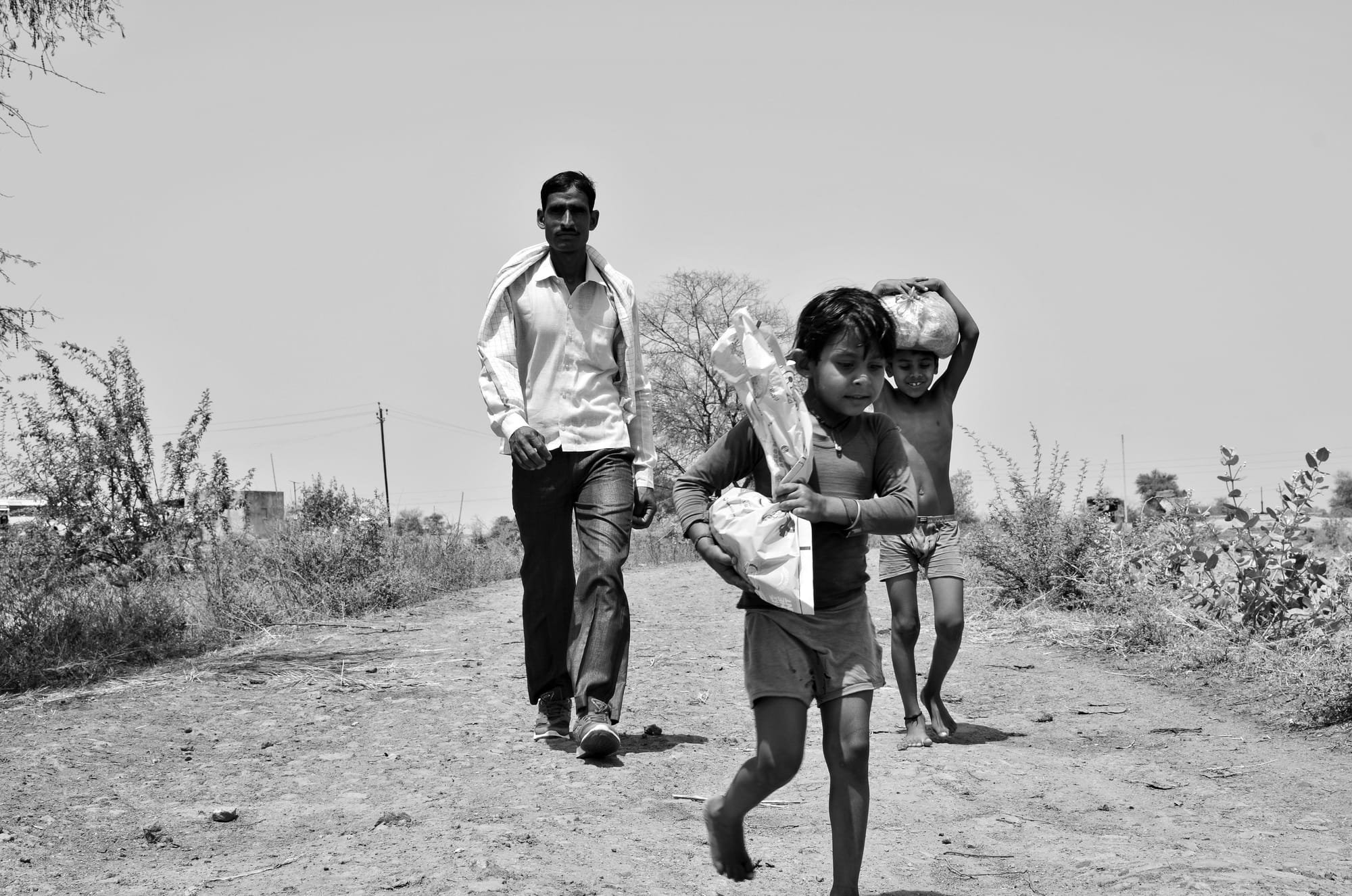 Morena, a small agricultural town in Madhya Pradesh, 39 kilometres from Gwaliar, was my workplace for two years. Famous for its forts, peacocks and gajak (a sweet made from sesame and jaggery), the town is surrounded by villages like Mungawali, Deori, Santa, Hadbansi, etc. I worked there as a teacher in a school on the outskirts of the town, surrounded by farms and a canal on one side, it was situated on a highway that connected the villages to the nearby towns and the city Gwalior. The highway had provided people in these villages an escape from the agrarian crisis. They could travel to nearby cities of Morena and Gwalior for work as what Jan Breman called “footloose labour” (pushed out of the agrarian labour market into the casual labour). In cities they are daily wagers hunting for jobs every day. Since the villages are connected through buses and other means of transport, they could return home after a day’s work.

However, during the sowing and harvesting season this migration would halt as there would be ample work in the farms. Instead of rural-to-urban migration, the migration would occur from rural-to-rural. Many people would arrive from other villages to work as seasonal farm labourers and sharecroppers on daily wages. Many of them would travel with their families and live in the farms for the season. Women formed an essential part of this workforce and the burden of labour was also doubly exerted upon them since they take care of the household as well as work in the farms as hired hands. Even though they work shoulder to shoulder with men in the fields they are paid lesser wages than men.

Those from the villages who had small land holdings would also stop migration to the cities because the fields required extra hands. Most of the landless peasants who worked as seasonal farm labourers and sharecroppers or had small land holdings in the village were Dalits, and so were the rural-to-urban migrants. Within MP (Madhya Pradesh), Morena comes under the Chambal region- historically famous for dacoits and rebels. The percentage of Dalits in MP is 15.2 percent and the Chambal region has the highest concentration. Though in the beginning most of the dacoits belonged to the Thakur caste (like Maan Singh and Paan Singh Tomar), later a big majority of them were Dalits (Phoolan Devi and Rambabu).

However, at the same time when migration during the sowing and harvesting seasons reduced drastically, in the cities the demand for casual labour would also increase. In many parts and sectors, the daily wage of labourers would increase due to shortage of migrant workers. Along with long-term migrants, they formed a major chunk of casual labour in the cities.

This shift in the migration did not just affect the villages and cities but my classroom also. During the sowing and harvesting season the attendance in my school would drop because the children helped their parents in the field during this time. The only students who could attend school during these seasons were children of Thakurs and Brahmins who owned large tracts of agricultural land or were not dependent on farms directly. The education of other children would suffer in these months and most of the school drop-outs also belong to this section of society. They join the precarious workforce at a fairly young age by migrating to cities and working in the fields. Children as young as 12 years of age can be seen working in the fields and highway dhabas and small hotels in the cities. Migration also impacts their education severely as small children travel with their families to other villages or cities for work.

At a daily wage of 100-150 rupees these farm labourers worked for 8-10 hours a day and lived in makeshift shanties on the farm. Those who travelled for work daily were not even provided a shed over their head and they also had to bear the transport cost themselves. The villages had their own problems. The canals that irrigated the lands had increased the yield, but prices of the crops were stagnant, cold storages were not sufficient in number. There was a clear dissatisfaction among the villagers about the government which was also reflected in the 2018 assembly elections when the ruling party lost a number of seats in the region. The Scheduled Caste agitation of 2018 had also strained the situation in the region. A nationwide Bharat Bandh called by Dalit groups over the Supreme Court order to amend the Scheduled Caste and Scheduled Tribe (Prevention of Atrocities) Act, 1989 had turned violent two groups- Dalits and Right-wing bodies- clashed in Gwalior and Morena. The violence soon escalated and engulfed the whole region like a wildfire. Seven people got killed, out of them five were Dalits. Since Dalits were mostly employed in the farms and industry owned by upper caste Hindus and there was mutual dependency between them, the agitation and the violence that ensued affected every aspect of the society.

Therefore, this photo-story is a reflection on the hierarchies and tensions that foregrounds this place, like many other places in Northern India: caste, gender, rural/urban/rural-urban. This photo-story is also an attempt to bring the reader closer to the lives of agrarian labour force and the rural India which has disappeared from popular culture and the New India’s imagination. The horrific pictures of migrant workers walking back home on foot the country witnessed on television sets­-- this story provides a wider glimpse into their lives and survival. A Dalit family of seasonal farm labourers from Mungawali taking a short break from the scorching heat under a thatched roof. They travelled 5 kilometres on rickshaw every day for work in the fields. During the season of harvesting the fields brimmed with activity and hard physical labour. In my conversation here, the farm labourer asked me about the cost of education in a ‘good school’. He said he wanted to send his children to an English medium school and that they were good but costly. Since I was a school teacher, many workers would make such enquiries. The education of children was their constant worry. A woman worker in the field under the summer sun. Though, they work the most, in discussion around labour and migration they don’t occupy any space. She was also concerned about her children’s education.  She had studied till 5th standard. When I asked her why she had stop her education she replied, “Maas sahab, samai hi na milo, kaha se pare,” there was no time left for studies. This group of women came from the village of Hadbansi. They belonged to the Jatav community. On enquiring I found out that they were paid less than their male counterparts for the same amount of work. They left their children back in the village where they tended to their small land. Some of their family members had migrated to Delhi while other had moved to Gwalior and Morena. This family of farm workers lived just opposite my school. They migrated from a distant village in the region and had settled here in this farm. Poverty had forced the family to displace. None of the children were enrolled in a school. The local villagers sitting on the side of a highway to sell their produce. They came from the nearby villages of Mungawali, Deori and Hadbansi. Most of the vendors were small farmers and had transported their produce on cycles or autos. On asking why they sold their produce on the highway, one of them said: “Dam nahi milta hain mandi mani isliye iha pe hi bech dete hain, tractor ka paisa bachta hain,” we don’t get a fair price at the mandi, so we sell it right here, it saves the tractor expenses. An old man clad in a traditional white attire wheels through the gravel road that connects the adjoining villages to the aforementioned highway. This highway connects the villages to Gwalior, the nearest big city. People have been migrating to cities like Delhi and Gwalior also. The migration is most prevalent in the Dalit communities, who are mostly landless agricultural workers. There are short term migrants too, who travel to Morena and Gwalior daily and work as construction workers. Construction workers in Morena. These workers came from the adjoining villages. In the villages they are either farm labourers or marginal farmers. The Brahmin owner of the aforementioned farming land located near the school. Fondly called ‘Panch Sahib’ because he was an elected panchayat member, he held an influence in the village. In our conversations he would often lament the ruling government and blame it for the current crisis in the agriculture. He owned multiple farms, and cattle and also sold milk in the village. A villager returning home from Gwalior, with his children carrying his loads. He worked in Gwalior. He was also a small farmer in his village of Chaina. The current economy of these villages is greatly dependent upon migration to urban areas.

Pratyush Paul works as a high school teacher in a government school in Bhopal. He has spent his past five years away from his city to teach in the rural villages and towns, while maintaining his strong passion for street photography. His subjects have always been the realms of overlooked reality.