Curated and translated from the Hindi by Ambrish

Editorial note: This is not an essay, but a work of curation. It contains a brief introduction of the poets, translations of seven poems from Hindi, a brief translator’s note, a couple of contextual notes on the poems, and references for further reading. 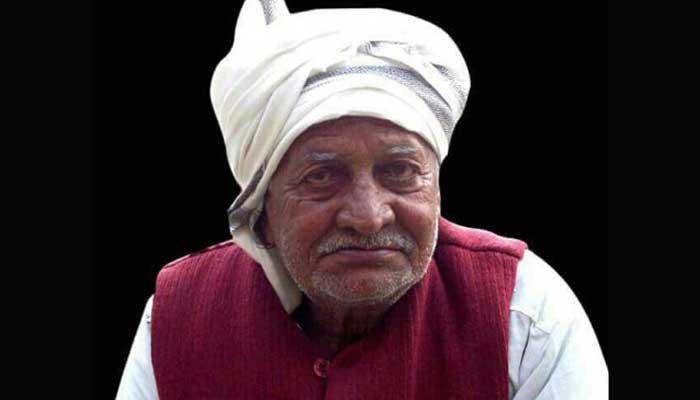 Born as Ram Nath Singh, Adam Gondvi (22 October 1947 – 18 December 2011) was an Indian poet from Atta Paraspur, Gonda, Uttar Pradesh. He wrote poetry in Hindi, highlighting the plight of marginalized castes, Dalits, impoverished people. Born in a poor farmer family, however, they had considerable arable land. Gondvi's poetry was known for social commentary, its scathing view of corrupt politicians and for being revolutionary in nature.In 1998, Madhya Pradesh government awarded him with Dushyant Kumar Prize. In 2007 he was awarded Maati Ratan Samman by Shaheed Shodha Sansthan for his contributions to Awadhi/Hindi. Gondvi died on 18 December 2011 in Lucknow due to stomach ailments. His poetry collections Dharti Ki Satah Par (On the Surface of the Earth) and Samay Se Muthbhed (Encounter with Time) are quite popular. (Source: Wikipedia)

For You Life is a Blossoming Gulmohur

You’d say a season of blossoming gulmohur is this life,

But for us impoverished ones only an utter mayhem is this life.

In sweltering starvation wilts down the vine of dignity,

Bitter than the moment of death is the experience of this life.

On the branch that is religion unceasingly blossom the riots,

Yet under the shade of a dream, rests obliviously, this life.

A lifelong illicit affair with the dead corpse of the light,

Engaged in the false notion that a blazing star is this life.

That where the innocent love of the youth is buried,

The nasty consequence of those urban streets is this life.

Those Bereft of Any Mention in the Vedas

Who are not mentioned even in the margins of the Vedas,

What use for those wretched ones is faith and belief!

Where that murderer of Shambooka is joyfully celebrated,

Why value the disgusting history of such an order!

How regressive the history of those lived experiences,

What to do of the tragedies, frustrations, agony, suffocation!

A drought means something so different to the intellectual,

What do I make of their fetishization of dead stumps!

The scent of fresh warm bread itself makes me ecstatic,

What use then do I have of promises of ethereal love!


Note: Shambooka was a Shudra ascetic, mentioned in Valmiki Ramayana, who was beheaded by Rama as punishment for doing penance/ meditation, which a brahmin had claimed was the cause of his son’s death. Ambedkar in Annihilation of Caste mentions that such transgression (of a Shudra attempting to be a Brahmin) was a threat to the varna system and therefore, Rama killed him out of a sense of duty; since Rama-rajya was based on the ideals of varna system.

From body to soul, everything dissected, denuded– behold!

The mob enjoys the spectacle, inviting you to join in– behold!

The youth was to do away with the dark clouds cast over this bridge;

Instead, such despair looms over their face– behold!

The nation burns, while it cajoles her people,

How obscene are the words of that poetry– behold!

Yet another Matsyagandha is to fall prey to an ascetic’s lust,

As this mist thickens and spreads afar– behold!

Note: Matsyagandha, also known as Satyavati, was the daughter of a fisherman and used to row travellers across the bank of a river. On one such occasion, she was rowing an ascetic called Parashara across the river, when he expressed his desire to mate with her there and then. To hide their act, he created a veil of dense fog over the river, around them. 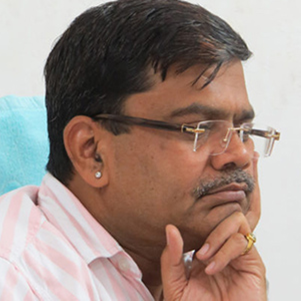 Asang Ghosh is a representative Dalit voice in contemporary Hindi poetry. From a young child helping his father mend shoes as a family vocation, Asang Ghosh went on to complete his PhD. He eventually became a civil servant in Madhya Pradesh government and is presently working with All India Administrative Services. He has authored 8 books of poetry and has short stories published in multiple Hindi journals. Besides numerous Indian cities, he has also been invited to Sri Lanka, China, Egypt, and Bali to recite his poetry. He has won numerous awards, which include Madhya Pradesh Dalit Sahitya Akademi Award (2002), Srijangatha Samman (2013), Guru Ghasidas Samman (2016), and Bhawani Das Singh Award (2017). (Source: Bengaluru Poetry Festival)

in which your god speaks,

I neither wish to read it,

nor do I intend to learn it.

Upon speaking in that tongue,

had their tongues pulled out;

Even today, my ears ring

with the deafening pain,

tearing through their eardrums.

to explain to such a god,

the matters of my life;

he neither understood ever before,

nor would he ever in the future;

Come, Sit With Me

come, sit here with me.

burn out your lungs

and break some sweat

an icon of love

then, get your hands chopped off.

come, sit by my side.

the two of us,

would get down to clean

if the stench becomes too horrid,

well, just cover up your nose!

come, sit in my company.

made purely of mahua

then, dump your scriptures,

although, in these tasks

how will your caste 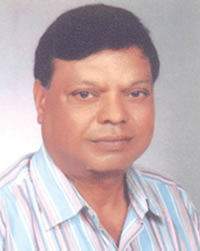 Surajpal Chauhan (born 20 April 1955, Phusawali, Aligarh, Uttar Pradesh) is a Dalit writer and publisher. His story, “Harry Kab Ayega”, 1999 is a well known work in Dalit literature. Besides, he has written an autobiography “Tiraskrit”, poetry collection “Prayaas”, and poetry for children. He is a recipient of the Hindi Academy Award and Ramakant Memorial Story Award, 2002. His works have been translated into English, German, Telugu, Marathi, Gujarati, Punjabi, and Urdu. (Source: Vani Prakashan)

In the Name of Artistry

Why do you stand

In the name of aesthetics,

want to wipe off

the ink of my pen?

and have tricked me –

in the name of tradition,

mere chatterbox of a literature

in the name of artistry!

The Actual Matter is This

It’s neither a matter of

the matter is not of

or of their religion, or faith.

the education and progress

or, about them acing

the field of sports.

The matter is neither about

appointing one a priest

nor is it about

getting the foundation laid

at the hands of a Shudra.

It's also not about

the grand games of Power,

or to reap its benefits either.

The matter really is,

What if the exploited people

would be laid exposed,

All my translating attempts are not more than two months old, but each time I try to meditate over a word of the poem in original and try exploring multiple words to strike a right balance of meaning, I feel the joy of a creator. That is a paradox of translation, and perhaps that's why it has been called an art. And so there can't be, I believe, a set of rules that ought not to be broken for a work of translation to be a good one. It does begin with the dry work of careful analysis of the skeleton that is the words, phrases, structure of the poem; but that's only to eventually (with hope!) let the effect appear in another flesh.

The soul or the essence of a good poem remains elusive. Perhaps that’s why, translating good poetry, especially the ones which lie out of our existing sphere of experiences, like the Dalit-Bahujan work in case, was a great study for me. The process of translation becomes a mirror. It is precisely in one’s failed attempts to capture the essence and in the flaws (the gap between the translator's choice of phrase and the original) that one gets a glimpse of their style, vocabulary, and the ‘politics of language.’

Among the three poets here, Adam Gondvi was the most difficult to translate. Not just because his prose is with a distinct rhyme structure but also because of the layers of meaning within and between the lines. He presents to the reader the condition of suffering as it is; directing our attention to matters that we see regularly but do not really look at. The sense of taunt and satire in his writing pushes the reader towards an introspection. The brilliance of his writing immediately shows and helps us recognize his position against the hierarchy of the caste structure.

Asang Ghosh’s words fall upon the reader like a rain of arrows. In his direct and simple free-verse writing, one can sense the frustration and aggression of the people exploited under casteist suppression, and there is a preparedness, a will to now fight back. He attacks with vigour both the caste structure and the religious tradition (Hinduism) from which he sees it stemming out directly, and with vehemence he rejects the million gods that this country prays to.

Surajpal Chauhan’s free-verse is simple in its flow, without a trace of pretentious vagueness that we find often in romantic verses. His central theme is to bring to light the larger picture of untouchability, not merely in the physical sense, but also in its manifestations of psychological prejudices and the literary ‘merit’. His work challenges the persisting elitism of the savarnas that practices certain notions of aesthetics, power, and success in a manner that overlooks their own privilege and deep-rooted discrimination; unaware that it is precisely this attitude that exists as a cruel obstruction in their path of progress.

Translating a poem allows one to listen to the poet more intimately. It remains not only a matter of mere agreement or disagreement but, becomes of something more, that of compassion. I could only have a glimpse of such a life, that Gondvi describes as an experience bitter than the moment of death. Or ask myself, if I see the stark social divide, the hypocrisy of the elite, and its effect on everything, from education to arts, from knowledge-making to creative expression as clearly as Surajpal does when he calls almost the entire literature a mere chatterbox? Or, reading in our cozy homes this wonderful magazine, amidst the present chaos that has made people suffer discriminatingly according to their class, caste and social network, are we frustrated enough to curse ‘our God’ as Asang does? The answer, if I be honest, is no. For to read, to listen, or to even translate, is from a distance. And as Asang points it out, the only way for me then is to go and sit with him, live his life. But, as he leaves us in the end with the question, “will your caste accompany you in all this?”, one feels a sacred thread materialize across their torso. And we must remember that; the very reality of it.

The original Hindi poems of the poets can be read at Kavita Kosh website; here are the links:

Ambrish is a past student of science. He is currently jobless, living in Dehradun with his mother, and is trying his hands at creative writing. He spends most of his time in random reading and film watching. He currently feels that he wants to make films in the future.