The cover art of this issue is a part of my series work entitled “Women: The Longest Revolution.” I created a series of three illustrations inspired by the progress Indian girls have made in the current times owing to the sacrifices made by their mothers and grandmothers. How our mothers and grandmothers silently but assertively rooted for our education and how they dared to dream for a better life for us despite them being denied the same privileges. By being fiercely resilient women of their times, they harnessed the glory of their era into raising capable young girls and women of today.

My series of illustrations depict the inter-generational aspirations of Indian mothers and grandmothers for their daughters and granddaughters. 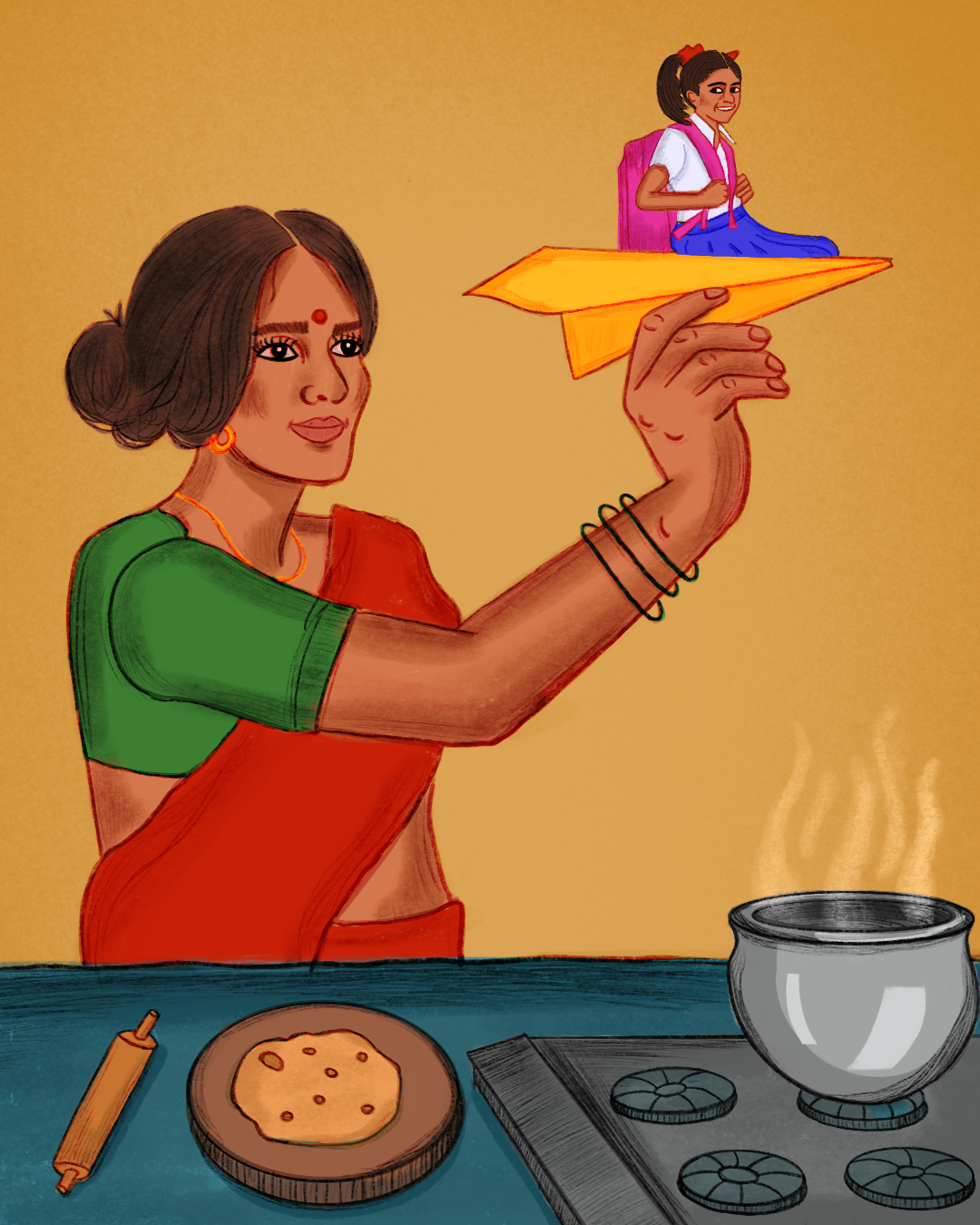 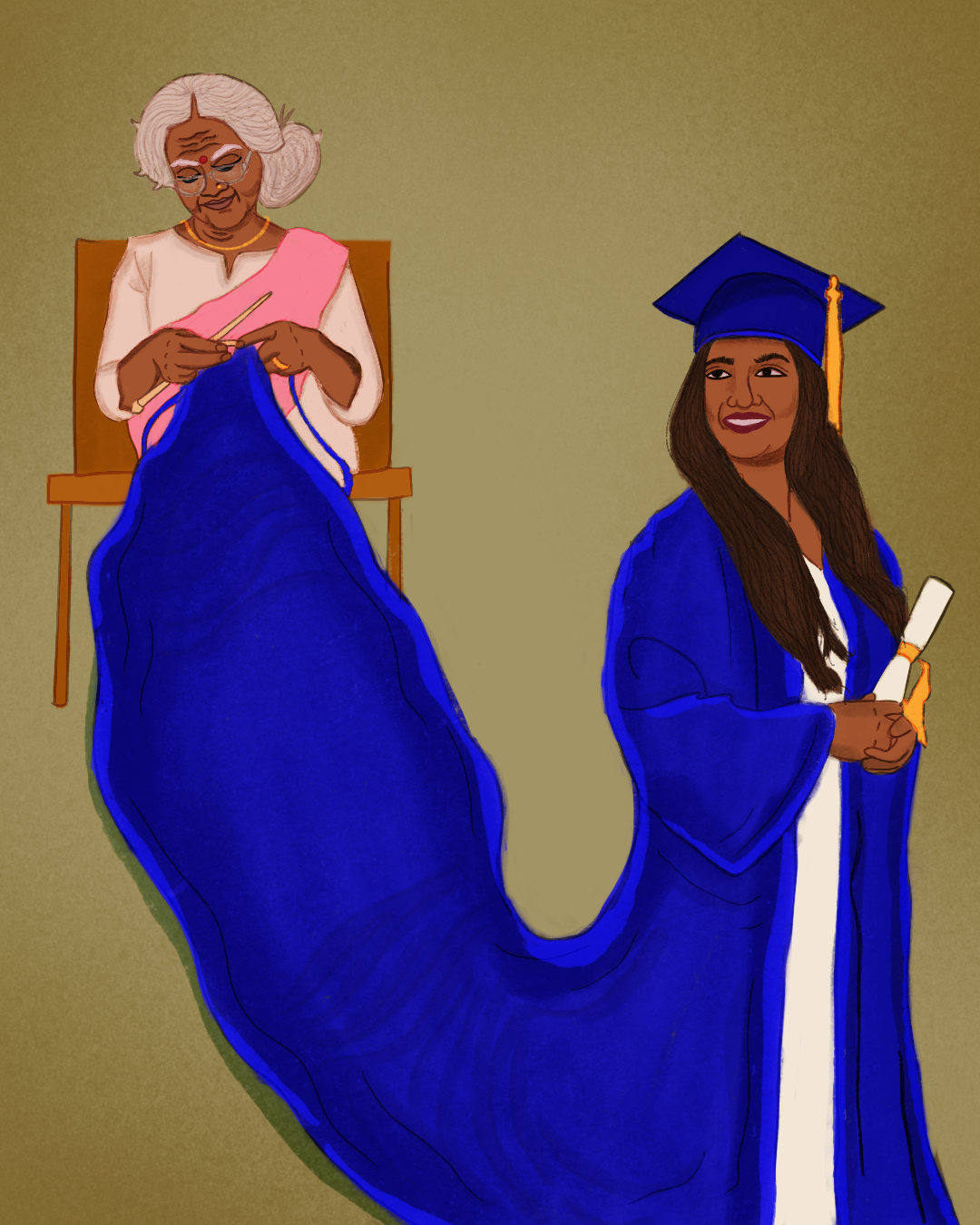 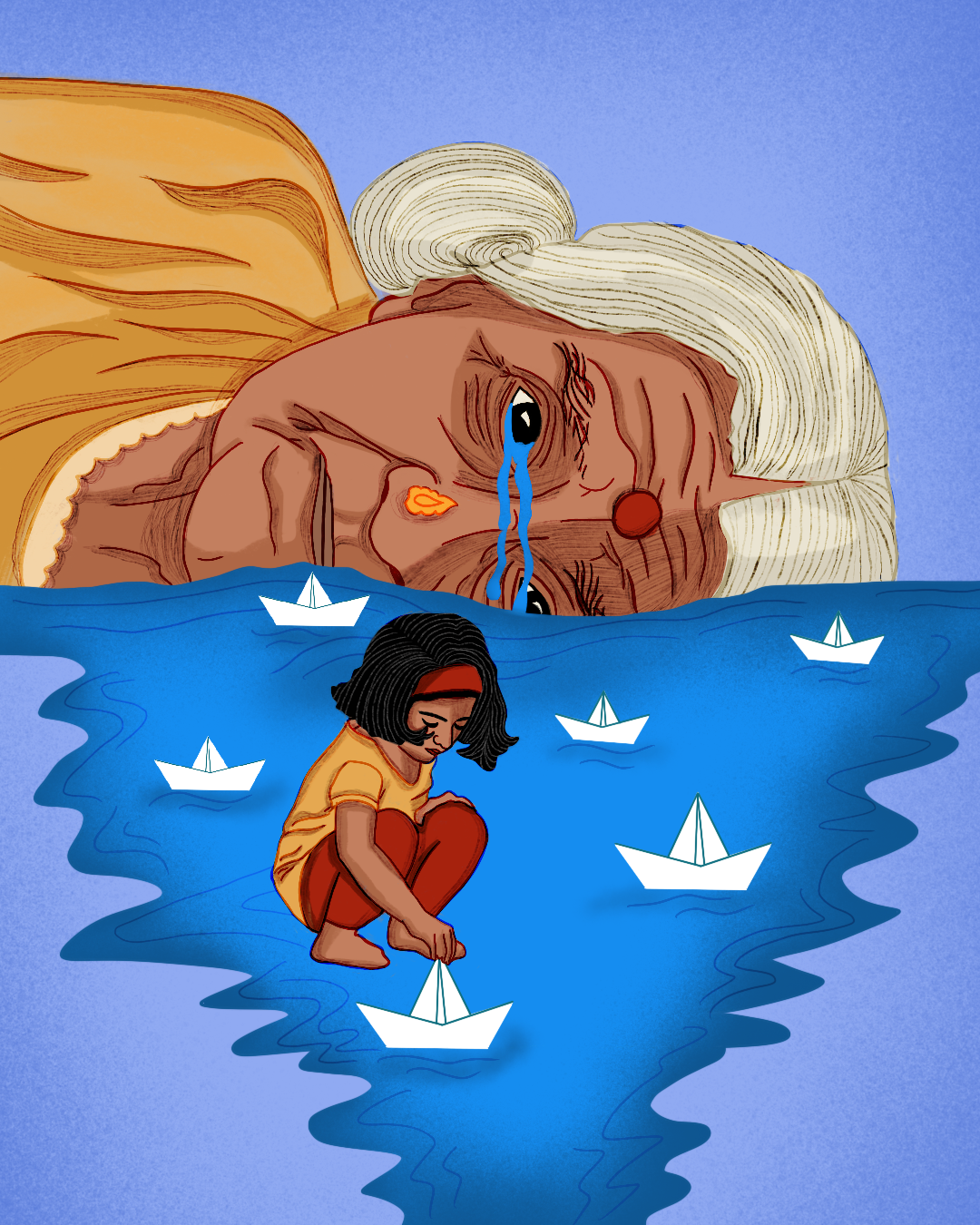 Smish Designs is a contemporary artist, designer and illustrator. Charged with meaning and drenched in colour, her work reveals and questions the social constructs of gender and power. Publishing under an alias, she has emerged as an important, young voice in Indian protest culture. She is active on social media, and regularly inspires conversation and concern for human rights and justice amongst her ever-growing audiences, both online and offline.

Smish Designs is a graduate in Graphic Design from the Parsons School of Design in New York. Since then, she has been featured in countless magazines, dailies and independent news platforms including Taz.de Berlin, the Gal-dem Magazine, thevibe.asia, The Hindu, Vice, The Quint, Hindustan Times and The Times of India. Born in 1988, she currently lives and works in Mumbai, India.
We, at gulmohur, wanted the artist to elaborate upon her journey of art and activism. The following are some of the responses of the questions we asked her over email. To understand her influence, follow her on Instagram @smishdesigns.

We are curious about how you began your work, and what the journey has been like. I began digital socio-political illustrations for my platform in 2019 after the national elections in which the BJP government won by a landslide. I had this urge to indulge in dissent then considering I was heavily affected by what was going on in the country. I started to put out anti-BJP artwork criticising the government, it was the least of the least I could do at the time, given my mental health wasn’t in good shape and I was anyway freelancing, so I took out the time to put out art as a form of protest. I didn’t know back then that what I was doing was a form of protest or dissent, I was simply venting and I remember being quite on the nose not caring about the backlash I could receive. It was also the time of anti-NRC-CAA protests across the country, there were heightened emotions flowing through everyone, people were deeply affected by the draconian laws that could wreck the foundations of our country. In the midst of all this chaos, I was profusely affected but I managed to channelise what I was feeling through my art, it so happened that a lot of people were feeling what I was, and my art resonated with people at the time, it gave my work a lot of meaning and maybe a purpose and so I never looked back and kept at it.

Who do you believe your audience to be? I am not quite sure who my audience is till now but I imagine them to be people who are sick of the current government’s tyrannical methods, and maybe who want to dream of a better India where it is alright to question their government, to talk of peace, equality, religious harmony, personal freedoms as well as dissent openly.
What impacts and shapes your art? My art is topical and so it primarily deals with current issues and recent upheavals of people’s movements and dissent against the current government. I wish I was more aware and informed honestly, there’s always room for that, which is why I have started to indulge in books, news articles and news media covering recent Indian history to better understand, reason and observe everything that’s happening now.

What is your idea of feminism in the Indian context and how do you navigate through it as an artist? I am still learning to be a feminist, I think for me social media has helped me to become a more aware and conscientious person/ woman, I derive a lot of empowerment and strength from social media discourse around feminism, something I don’t find around me. People tend to undermine social media and its power to uplift people, especially marginalised genders and communities, it has only made me a better feminist, a better human in general. I find solace in it when I am struggling to make sense of the suffocating patriarchy around me, it gives me hope and enough power to keep moving. The most burning issues close to my heart are right to life, right to education and right to basic healthcare for young girls and women in India. These are basics that must not be underplayed in the movement while addressing urban, more magnified feminist issues, rather they must be talked of simultaneously.

What bothers you about the Indian art scene and what kind of hopes do you have? I am relatively new to the art world, still getting a grasp on it. From what I know so far, I feel like I don’t fit into that mould. My work is, as they say, quite direct in terms of dissent or protest. There still isn’t an ecosystem for artists like me who unabashedly criticise the government or societal systems. I have to tone down my work quite a bit whenever I present my work in a gallery or I take a completely different route. I really hope and wish that in the near future, dissent art finds its rightful place in galleries too!

Who are the other digital artists you look up to? I think Orijit Sen is someone who kind of inspired all resistance artists including me to pick up our tools and create to resist. He’s the OG dissenter of our times! Apart from him, Sanitary Panels is someone I really find inspiring, Siddhesh Gautam for his confrontational yet empathetic approach to his art, Madpaule Diaries for their skill and sheer ingenuity and Artedkar for making us all think and feel on a level that’s way beyond our comfort zone.

Who are your role models (writers, artists, thinkers)? One artist’s work that I truly admire is that of Yayoi Kusama. I can relate to her on a deeper level I think, someone who creates intellectual and engaging art while using her “visions” as she likes to call them, she has managed to embrace and harness her mental health condition in its full glory and we are all just witnesses to her magnificent mind. My other favourite artists are Mark Rothko and Claude Monet.

What message could you give to other younger artists on digital media, based on your experience? I would say to them to put their work out there on social media for visibility for the lack of gallery representation but at the same time slow down while taking out the time to hone their skills and practices. Social media is like a drug and you often feel like posting regularly without caring about what direction your art practice is taking, so take regular pauses, work on your craft or improve upon your style more often. From personal experience, I’ve had way too many burnouts while posting regularly on my platform, given the amount of trolling I receive too, in the long run, it’s not sustainable, keep taking free online tutorials, trying different styles and techniques. Often on digital platforms, you receive instant validation for your art which stops you from experimenting and growing as an artist, I am learning this the hard way.

Do you believe artists need a community of peers to flourish? For sure! Considering India is still waking up to digital art as an art form, I was lucky enough to find support in my peers thanks to social media networks. We often reach out to each other for support and exchange of ideas which has been quite rewarding. We get inspired by each other’s courage, ideas and approaches, I feel quite grateful for sharing the same space as them, and learning from them time and again.
What is your method of working? I mostly try and have a human touch in my illustrations as much as I can, I feel like it makes it more humane and easily relatable and has the potential to evoke empathy, angst or anger more easily in people. Because I usually create topical art, which is me giving my opinions on topical burning issues, I realise the life of my work is not more than 15 seconds, and so I try and incorporate elements within my work so that people can instantly connect with the art and become aware about the issue addressed. The elements used in my artworks can range anywhere from a day-to-day object to a pop-culture reference to throw light on important socio-political issues. I mostly keep my style very minimal so it’s not too chaotic and is easy to grasp in the matter of a few seconds.

What inspires you the most and what blocks your work? People’s movements, their courage and their trust in their constitutional rights on accord of which they dare to dream, hope and fight. I find that immensely inspiring and it gives me a lot of hope for our country. I think when I get too affected by the news is when I feel less motivated to create anything. It affects my thought process and sometimes I have to push myself to put the artwork across nonetheless in a more confrontational way but it's very consuming.

What do you expect for yourself in the coming year? I expect to refine my skillset and style more in order to explore more with my craft as well as work with other mediums. I also want to learn how to manage my moods and emotions and work on my mental health to have a stronger mind in the longer run.

Smish Designs is a contemporary artist, designer and illustrator. Charged with meaning and drenched in colour, her work reveals and questions the social constructs of gender and power. Publishing under an alias, she has emerged as an important, young voice in Indian protest culture. She is active on social media, and regularly inspires conversation and concern for human rights and justice amongst her ever-growing audiences, both online and offline. Smish Designs is a graduate in Graphic Design from the Parsons School of Design in New York. Since then, she has been featured in countless magazines, dailies and independent news platforms including Taz.de Berlin, the Gal-dem Magazine, thevibe.asia, The Hindu, Vice, The Quint, Hindustan Times and The Times of India. Born in 1988, she currently lives and works in Mumbai, India.