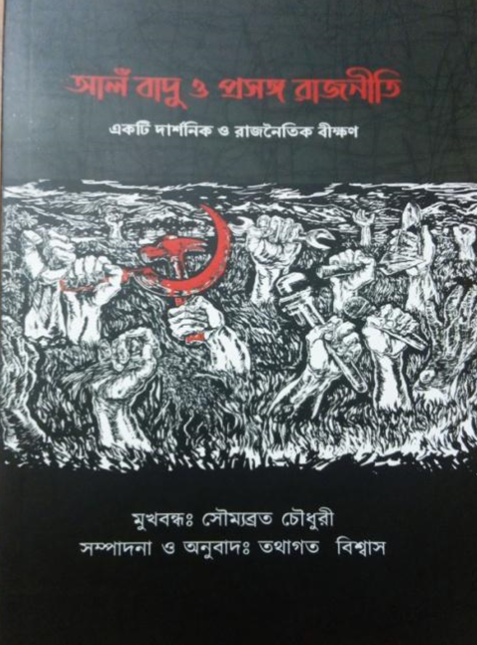 In lieu of a few introductory words: what you are going to read in the following few pages is not an academic article, but a sort of travelogue, notes from a journey undertaken during the pandemic, story of a collective effort to think an alternative/communist politics through an interview of French Marxist philosopher Alain Badiou. The hope here is to acquaint you with the Bengali translation of Alain Badiou’s In Praise of Politics (Polity Press, 2019, translated from French by Susan Spitzer) or Éloge de la Politique (Flammarion, Paris, 2017, Badiou interviewed by Aude Lancelin). I have translated from English to Bengali. It’s a translation of a translation, copy of a copy, twice removed from its original French substance! Due to this act of double removal many semantic slippages have made their way in to the very body of the Bengali translation knowingly or unknowingly. Some of which are still troubling me, for instance, the Bengali title itself couldn’t bear the weight of the word in Bengali which conveys praise or a collective joy. Both the French and the English titles bear the word “Éloge” and “praise” respectively, but the Bengali title itself couldn’t bear the weight of the word “praise” (in Bengali) which conveys a collective joy. Why so? Why can’t we say in Bengali ‘in praise of politics’ (Rajniti r Prashangsa)? It’s not a question of grammar, but of convention. Rajniti r Prashangsa would be apt and literal translation of the title, but our ear didn’t approve the very sound of “prashangsa” as it would have been received in a Bengali literary community. Now what does it show? Is it only a matter of convention or a habit of listening? Even if it is the case, I think it’s a worthwhile exercise to pause for a brief moment to ponder over this issue here. Why can't we praise politics in Bengali? Why does it not sound alright? Due to ‘mere’ linguistic convention or the real reason behind it is that politics (rajniti) has over the years become so filthy that we cannot even entertain the very thought to praise it! Contemporary “realpolitik” and discourse surrounding it doesn’t allow us to associate ‘praise’ (prashangsa) with politics. Now what is this ‘politics’ which we cannot praise? Politics as a “game of power” (khomota r khela).

Only last year, during West Bengal Bidhan Sabha (State Assembly) polls, we have all witnessed the endless trumpeting of the song and the slogan “Khela Hobe” (let’s play the game)? Politics is this “khela” or game of capturing power from opposition in the playground of election, which almost, always, already, literally is a war; with or without a long march of dead bodies, booth capturing, and abusive quarrel among leaders, cadres, supporters of different political parties on mainstream news channels or on social media. The process of election that is getting people’s mandate is always marred with this ritualistic violence. In this context, if we are to praise politics, if we are to erect an alternative politics, that politics should be different from this ‘game of power’; Alain Badiou invites us to think about politics which is not merely a game of capturing power. Badiou has shown the way to do so throughout his active political-intellectual career through several books, essays, plays, novels, speeches, lectures and interviews over decades. The reasons behind choosing this particular essay are (i) It is a reflection on contemporary world; (ii) here he is speaking more as a political activist, hence the tone, texture and the message is more accessible to anyone who is not acquainted with his main philosophical works, like me for instance. What fascinated me personally when we started reading it collectively are the questions that have been discussed in this long interview.

They are as follows: the central question of the book is how to think about politics today? Especially when 99% of wealth and resources of the whole earth is in the hands of 1%, the oligarchs of contemporary capitalism. When life and livelihood has become antagonistic to each other under the spell pandemic, when people are dying due to lack of oxygen, or under police brutality, when there is serious threat to the very existence of the planet earth; in this situation we are all forced to think of a way out of predatory capitalism. We are also observing that people throughout the world are protesting against their respective authorities, against authoritarian regimes but their protests, movements in effect strengthening right-wing populist forces. If we are to think an alternative politics in this context, what would be its philosophical basis? What would be its principles? Would that be a repetition, a copy of ‘democratic polity’ as we have been experiencing now? What is a democracy? Is holding regular elections the only hallmark of a democracy? Whose interests do all current political parties serve? Do they serve people? Do they really uphold the principles of equality and justice? Or do they serve the interest of capital? Is to become a slave of capital the only fate of democracy? Is state socialism still the alternative? Will it be a communist society? Should we still retain the name ‘communism”? Or, can we think of an egalitarian society based on principles of equality and justice outside of the binary of capitalism and state socialism? If we are to build this egalitarian society what will be the role of a political activist, of an intellectual? Who, today, has the agency and collective subjectivity to change the world order? How to organize with them today? In this booklet we are invited to ask such fundamental questions with Alain Badiou and Aude Lancelin. The original French one and the English translation have five chapters, but here we have kept aside the last chapter which is focused only on France.

This project has been conceived collectively by me and my friends of Prabuddha Collective during the pandemic, when we could only connect with our friends, and relatives online. Lockdown gave us the opportunity to think about politics in different tongues, idioms and vernaculars. Then the question came up: which politics and for whom? Then I encountered a talk by Soumyabrata Choudhury (Associate Professor, School of Arts & Aesthetics, Jawaharlal Nehru University) organized by Prabuddha Collective on thinking about politics, from that talk the idea of translating Badiou in different Indian languages came to our mind. We had started discussing the project during the first phase of lockdown, then I got involved in teaching online. It took a back stage for the time being. Electoral frenzy of the West Bengal assembly election and the communal venom that has been spread which polluted the politico-cultural biosphere of our ‘democracy’ acted as a trigger to execute the project. I was nervous since I knew next to nothing of Badiou’s philosophy; then, Soumyabrata Choudhury agreed to write a foreword for the Bengali translation which energized me to complete the project. We have spent many sessions on mobile phones where Soumyabrata Choudhury (Soumoda) has delineated the philosophical background required to appreciate this interview. Soumyobrata Choudhury has placed Badiou’s notion of politics in the broader matrix of his philosophy in conjunction with Badiou’s notion of Truth and Subjectivity. The alternative concept of politics that Badiou proposes is intrinsically linked with the concept of Truth. According to Badiou, politics is one of the ‘truth-procedure’ organically linked with the concept of Justice. It is a practice and a procedure which produces Truth. Truth, a collective ownership of Justice, which is mere ideal, is realizable through, and only through, history- which has happened during revolutions such as Haitian Revolution, French Revolution, Bolshevik Revolution in Russia and Cultural Revolution in China. Truth, hence, is historical and universal at the same time. This dialectic of Truth emerges especially during a rupture in history, during a revolution or “Event”. Truth is partisan and subjective. It is not eternal or perennial or general. It is personal, but not private. It is Singular. One who is committed to this politics, also expresses their fidelity to Truth. Without this fidelity to Truth, one cannot become a Subject. The concept of Subject is different from the concept of Individual. Subject is a rarity. One has to become a Subject at a specific juncture of history. By committing oneself to Truth, one becomes a Subject. Apart from this commitment, politics also has an enthusiasm, a collective joy, a joy of the sorts we experience as an audience while watching a theatre performance. This joy does not emanate from self-interest or from purchasing commodities. It is a gesture of a collective body, a joy of creating new truth, creating new language to express that truth, a joy we find in poetry. Politics in this sense is a creative endeavor, not a game of power, a procedure to create Truth. Badiou invites us to praise this politics. But alas! We cannot praise politics in Bengali; perhaps such a creative conception of politics has not been thought in Bengali yet.

However, such lack of praise has been somewhat fulfilled during the sessions with Soumoda which were the learning curve for me, full of insights, joy and intensity for politics and for philosophy. Friends of Prabudha Collective, especially Vaibhav Abnave played a vital role in explaining Badiou’s thought. Viplov Wingkar also played a crucial role in this regard. Thanks to my publisher, friend Ishan Banerjee of Dro:BiDro: and Adway (Boibhashik Publishers) to distribute this booklet which has now been published during Kolkata International Book Fair 2022 (28th February-13th March); I like to thank my friends Anupam Roy, visual artist and political activist, along with Tushar Kanti Saha for the impeccable cover page; special thanks to my good friend Amarkant for giving me the opportunity to share with you this experience of translating Badiou. Ultimately, one cannot think anything, let alone politics, without friends. 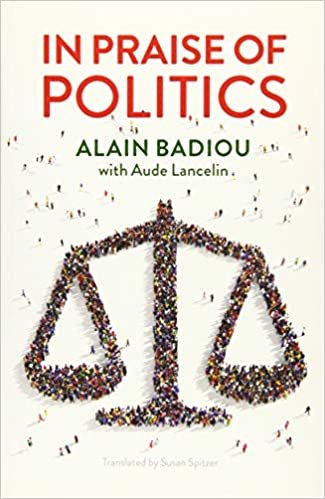 The English title can be found here: In Praise of Politics/ Alain Badiou

Readers may send their queries and comments to the author at biswastathagata@gmail.com

Tathagata Biswas is a student of philosophy, interested in modern Bengali literature and contemporary social-political movements. He looks forward to  your feedback and queries on his works of translation. He has also translated from English to Bengali various articles written on the Yellow Vest Movement in France (available here) and written a short piece on Data Protection Bill. He has also contributed translations of Bengali poems and songs in the first two issues of gulmohur quarterly.