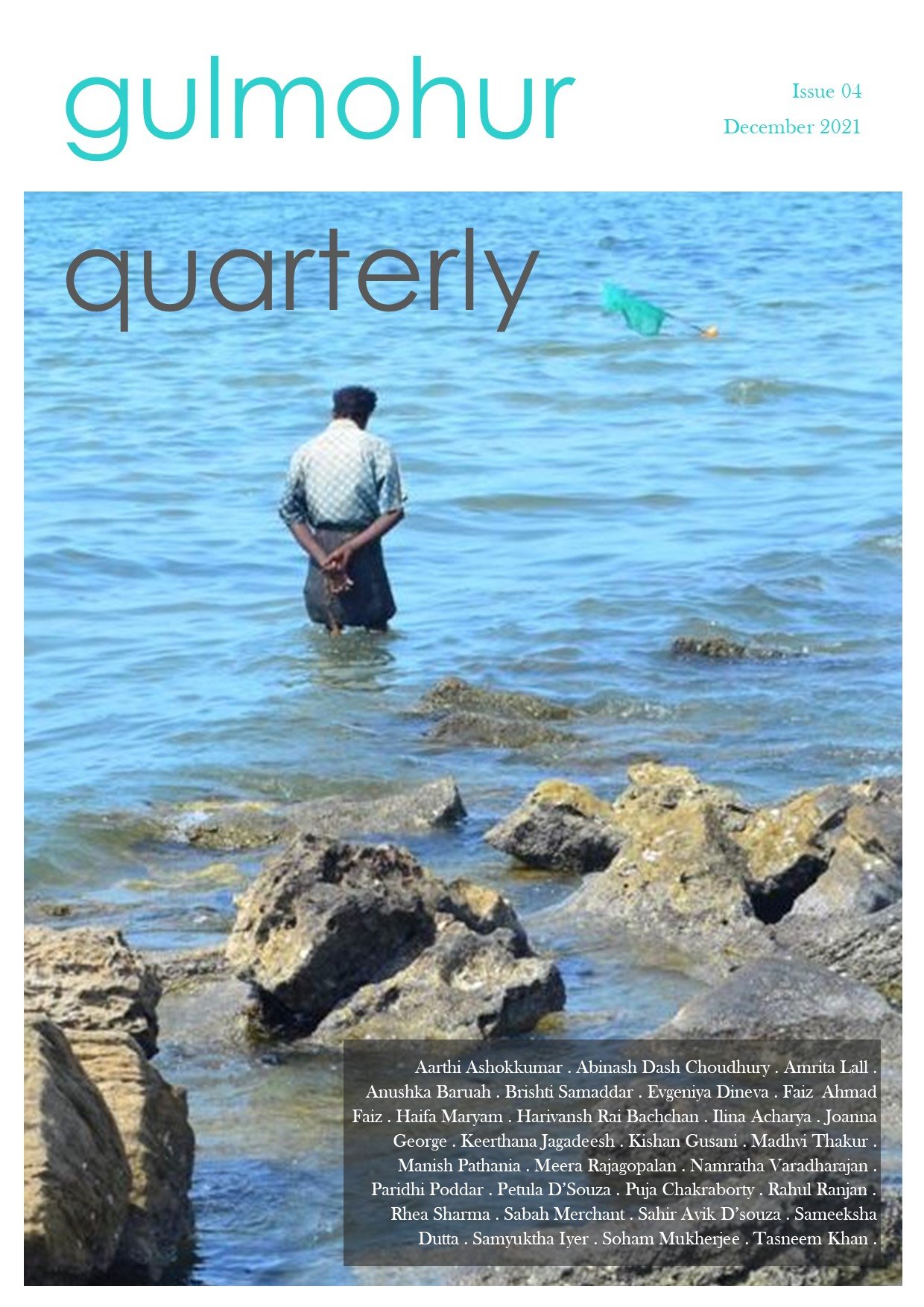 This December, gulmohur is four issues old and though one shouldn’t find fault with a one-year-old, we thought we could use this opportunity to reflect back and see how we started and where we are.

gulmohur took birth in the middle of this pandemic. Involuntarily, the world took a break from self-destruction and an invisible and treacherously unpredictable virus got hold of its destiny. Intelligent people said the virus is going to change everything for the worse and that there won’t be any return to normalcy. The prophets of doom declared that the end of the world is staring right in our faces. We guess, this was the kind of push we needed to launch gulmohur, the idea of which had been infecting our conversations and thoughts for an unfairly long time.

A year ago, when it was conceived, we did not label it politically. In times when ideologies are maliciously positioned as hostile ‘for-and-against’ binaries, what sense could an explicit political stand bring to its readers? We received feedback and candid criticism from many quarters that gulmohur must categorically state who and what it would publish and that it speaks out on issues and expresses solidarity with struggles and protests. Though we addressed the latter through the pieces we published and more explicitly in the Editorial space, we refused to align with any ideology or put restrictions and limitations on the content that we published. It was a conscious choice, not a slanderous hit-and-miss opening affair. Stating outright what and who we wanted to publish was, we felt, usurping an idea in its embryonic stage.

A literary magazine must have a literary voice, a style of its own, a sensibility (as we like to say), something it is associated with and remembered by its readers. What it publishes must meet the literary requirements and should strive to push boundaries and explore new territories in the art of the writing. It cannot compromise on its primary duty whatever its politics may or may not be.

On the other hand, we also understand that literary quality is not a natural offspring of innate talent or some kind of magical creative streak in certain individuals; that even if anomalies exist it is largely a construct bred by socio-political structures that are highly exploitative and unjust; that there are certain caste and class groups that have been excluded from progress and civilization-- and the field of literature is no different from any other.

On top of all this we chose English as gulmohur’s language of expression and were not blind to the paradox that what we aimed at capturing through gulmohur was in conflict with the language we had chosen for it. After all, who speaks English in India? And in this case, who can craft elegant or even grammatically correct sentences in English in the Indian society?

Here, we do not wish to present a defense of our decision or of the English language. We would like gulmohur to speak many more languages, preferably regional, but as of now we are constrained because of resources and, therefore, it stays an ambition. However, English will remain its mother tongue. gulmohur was carved to make a space in the Indian English literature publishing world. We were happy with the choice because we believe that it has a huge potential in a country like India where the essence of what’s publishable in English had been bestowed upon the savarnas by the white fathers of English literature. Indian English literature is still confined to upper-class, upper-caste Hindus, largely. They write, publish, criticize, throw literary festivals, and own all the resources. The sensibilities and the worldview they share reflects a particular class of elite Indians and their India.

If the initial idea was to publish Indian English writing that was non-elitist in nature and sensibilities and sometimes up in arms against it, there was also an equal emphasis on the translation of vernacular texts. When we couldn’t find translations, we did it ourselves or teamed up with friends and acquaintances. We chose writers who were not mainstream and wrote (in language and on topics) from a margin that disturbed the status quo.

As a literary initiative it hasn’t been easy to fulfil all the expectations and promises we had laid out for ourselves, but we have tried our best. Since we are a new magazine, we were completely dependent on the submissions we received, and tried to reach out to as many people, artists and platforms we possibly could.

For us, from the very beginning, gulmohur has been a labour of love. It has no other objective but to serve its readers literature that’s well written, that shows engagement and reflection.

Rather than a high-pitched protest, gulmohur sought to become a voice, a voice that would gradually gain volume and clarity over time. It was ambitious as well as cautious in its approach. It had a sense of where it wanted to place itself in the world and knew beforehand that the journey was not going to be an easy one. Nevertheless, we have received overwhelming appreciation and love from readers, contributors, and friends, and some constructive feedback and criticism, too.

In this one year, gulmohur had its ups and downs (like its team had) and it overcame challenges and has published its issues in time with sincerity and incredible hope (unlike its team). It was the year in which the country saw the most devastating phase of the pandemic. Millions lost their lives and livelihood. Inflation has been wreaking havoc on the masses. Fascism is on a vulgar rise. Sectarian and caste violence has picked up pace and intensity, free voice and expression is under attack.

Faiz said, ‘lambi hai gham ki shaam magar shaam hi toh hai’, the evening of sadness is long, but is an evening after all! We hope that it’s only another evening for those who are suffering in these dark and difficult times and that when the dawn arrives, we sing our pains and scars and also remain capable of giving words to our dreams and hopes.

gulmohur rejoices in the victory of the farmers and mourns the losses of their lives, a testament to the state’s indifference; we stand in solidarity with the victims of fundamentalist rule anywhere in the world; the many arrested journalists; the jailed activists and intellectuals of the Bhima Koregaon case; the victims of caste and gender violence; and with all those who dissent in the spirit of democracy to safeguard our ever-diminishing freedoms.

We profoundly thank our friends, Ankita Sadhale, Sauvik Sen, and Shuchi Sinha, for their financial contribution to the magazine. We are immensely thankful for the help we received from people in reaching out on social media. Our sincerest thanks to Arunava Sinha, Akhil Katyal, Anurag Minus Verma, Art of Resistance, Frustrated Indian Bahujan, @ind.igenous, Janice Pariat, Mahesh Rao, Marg Magazine, Orijit Sen, Pagdandi Bookstore Café (Pune), Paromita Vohra, Rahee Punyashloka, Siddhesh Gautam, Smish Designs, Snehal P Sanathanan, Tanvi Mishra, The Lit Archives, Walking Book Fairs, Varun Grover, and Vijayendra Mohanty. We also thank our past contributors and other friends who helped us spread the word which brought us an encouraging number of submissions. We thank all those who made submissions, too.

We hope you enjoy our fourth issue. You can now read the entries directly on our website in the webzine format and comment your feedback to the authors. Do share the writings you like with people around you. Please share your critical feedback with us, too.

We wish the new year brings well-being for us all.