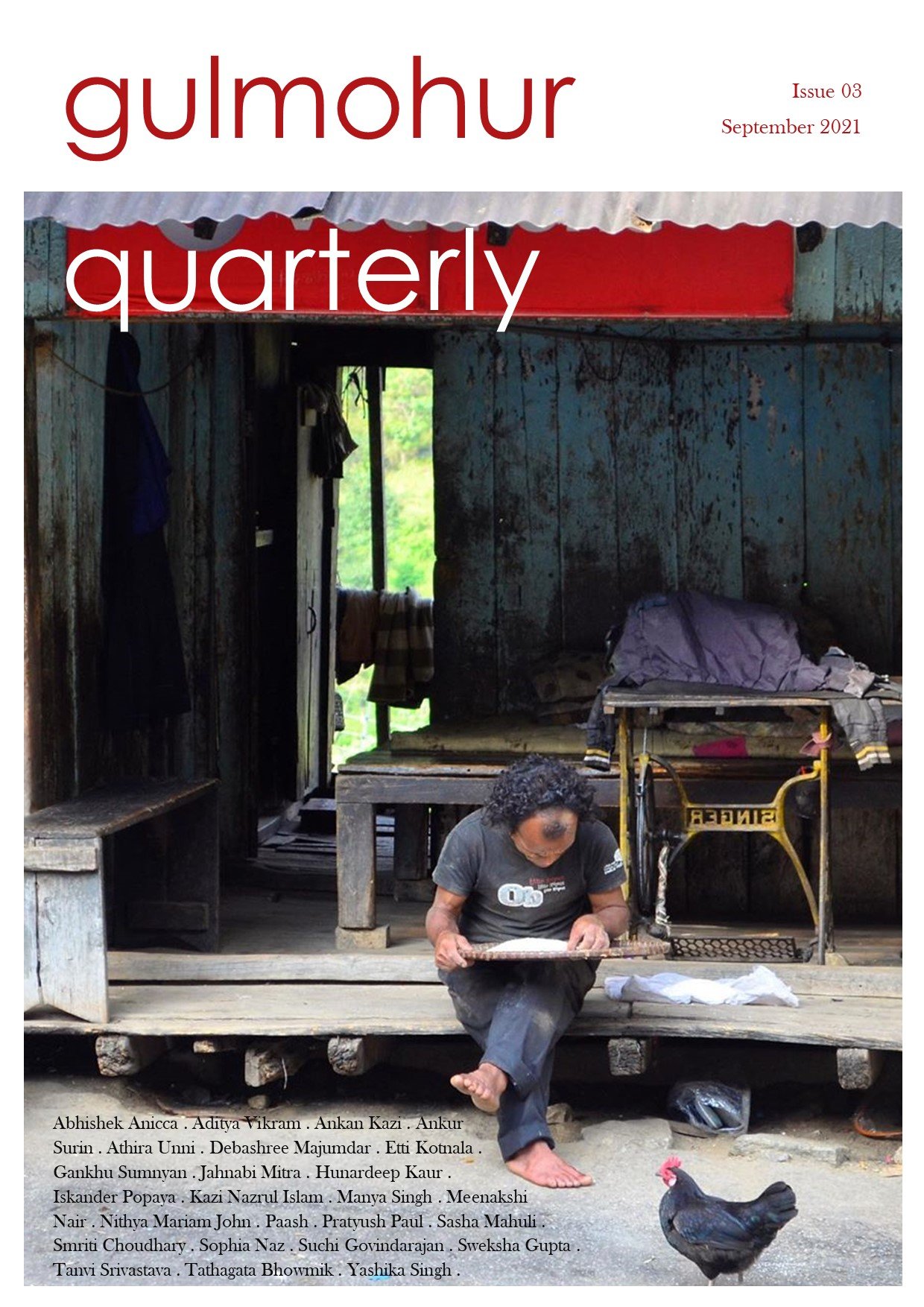 On a drowning ship, people were wailing and weeping among their own folks. For days and nights, the ship rocked and swayed like an elephant in musth. The megaphones on the ship blared the same announcement over and over: All is well! All is well! All is well! The words, stripped of faith and finery, had become noise no one paid attention to anymore.

Like the dying people in books who count like beads their lived moments, those people busied themselves in completing their strings of memories, bead after bead. Some begged forgiveness for their lapses, some cried at the feet of their victims. The lonely looked back to their gods. The hopeless and the sceptics were rejoicing, hysterically.

Those who spoke and those listening blended into a singular cacophony.

Aboard the ship was a madman who went to each one and said: ‘Will see you there.’ Now, who could entertain such non-sense in their final moments! So, people ignored him. When the madman repeated his ‘see you there,’ giggling, before a child, the child asked with curious eyebrows: ‘Where there?’ The lunatic lost his laughter and the next instant, the child’s soft cheek was red with a hot slap.

People dropped their telling of beads. The madman was then beaten up badly, madly. The strings of beads broke and scattered tiny beads all over the deck. People flopped on their knees and went back to collecting their beads. The bleeding madman stood on his faltering legs and screamed with all his strength, ‘I’ll bloody see you all there.’

That shrill edict stunned everyone into silence. A woman, who was praying with closed eyes - bent on her knees - walked quietly up to him and placing her hand upon his shoulder, asked, ‘But brother, where?’ The madman grabbed her hand, lifted a rod and brought it down on her skull.

The horrified people shouted and screamed at the jet of blood collecting rapidly in a thick pool. They attacked the madman with whatever fell within their reach. Someone at the back of the mob suggested, ‘Throw the fucker off!’ A bunch of hands, then, grabbed him and hurled him into the water below. The madman yelled from the water: ‘I’ll see you all there, I will.’

The praying woman who was trying to hold the bleeding with her scarf, when she heard those words, threw herself off the railing to save the madman. At this, a few more dived down. Whoever tried to rescue the madman was drowned by him. He kept saying to each of them, ‘See you there.’ Around this time, there came a huge sea storm that tore the sails and flipped the ship. Those who could not swim were swept away by the waves; and the others were taken there by the madman.

This issue features brilliant writings ranging from the themes of the personally evocative to the politically declarative. Two of the stories explore an intimacy between humans and animals, weaving a tragedy around the emotions that follow from attachment and separation. Food, too, is interestingly explored across the categories through the associations of obsession, anxiety, affection, and desire. The poets have made a sincere and creative attempt to centre their verses around the issues of sexuality, childhood, trauma, insecurity, and the struggle as an inherent aspect of existence. The political not only seeps into the personal, but becomes its ground for reflection and action.

The political manifests in these pages through subtle understandings of the present scenario of the national affairs. A poet speaks from the position of his experiences as an Adivasi and of his encounter with the mainstream perceptions; where another exclaims: “Now must I fear for my life being snuffed?/ Hasn’t media already done enough?/ Is calling out the present ill such a crime?/ That I be hanged and gutted for my rhymes?”

We’re so excited to feature a wonderful translation of a short fiction by Kazi Nazrul Islam. Another powerful work of translation in this issue is a poem by Paash, the Punjabi poet of revolution. We strongly encourage readers from regional languages to consider translating the good literature they come across. The photo story category received a great number of submissions, of which two of the most splendid works are at display here. This surely opens up the opportunity for photographers around us, to showcase their art before an excellent readership.

gulmohur stands in solidarity with the farmers’ movement against the farm laws, which is bearing state violence in broad daylight; the victims of fundamentalist rule anywhere in the world; the many arrested journalists; the jailed activists and intellectuals of the Bhima Koregaon case; the victims of caste and gender violence; and with all those who dissent in the spirit of democracy to safeguard our ever-diminishing freedoms. We pay our deepest respects to  Stan Swamy and Gail Omvedt, who lived a life of exemplary dedication.

We would like to thank Srabani Bhattacharya for her gracious assistance in our editorial review process. We also thank our friend, Samrat Salve for his thoughtful comments as a reviewer. We are immensely thankful for the help we received from people in reaching out on social media. Our sincerest thanks to Akhil Katyal, Anurag Minus Verma, Art of Resistance, Areeb Ahmed, Bahujan Meme Page, Frustrated Indian Bahujan, @ind.igenous, Janice Pariat, Mahesh Rao, Marg Magazine, Orijit Sen, Pagdandi Bookstore Café (Pune), Paromita Vohra, Rahee Punyashloka, Siddhesh Gautam, Smish Designs, Snehal P Sanathanan, Tanvi Mishra, The Lit Archives, Walking Book Fairs, and Vijayendra Mohanty. We also thank our past contributors and other friends who helped us spread the word which brought us an encouraging number of submissions. We thank all those who made submissions, too.

The first two issues have received an enthusiastic response from our readers and the third is definitely here to cement our commitment to meaningful literature and art. We hope you enjoy our third issue. You can now read the entries directly on our website in the webzine format and comment your feedback to the authors. Do share the writings you like with people around you.

Finally, be observant, be watchful. A lot is happening around us.