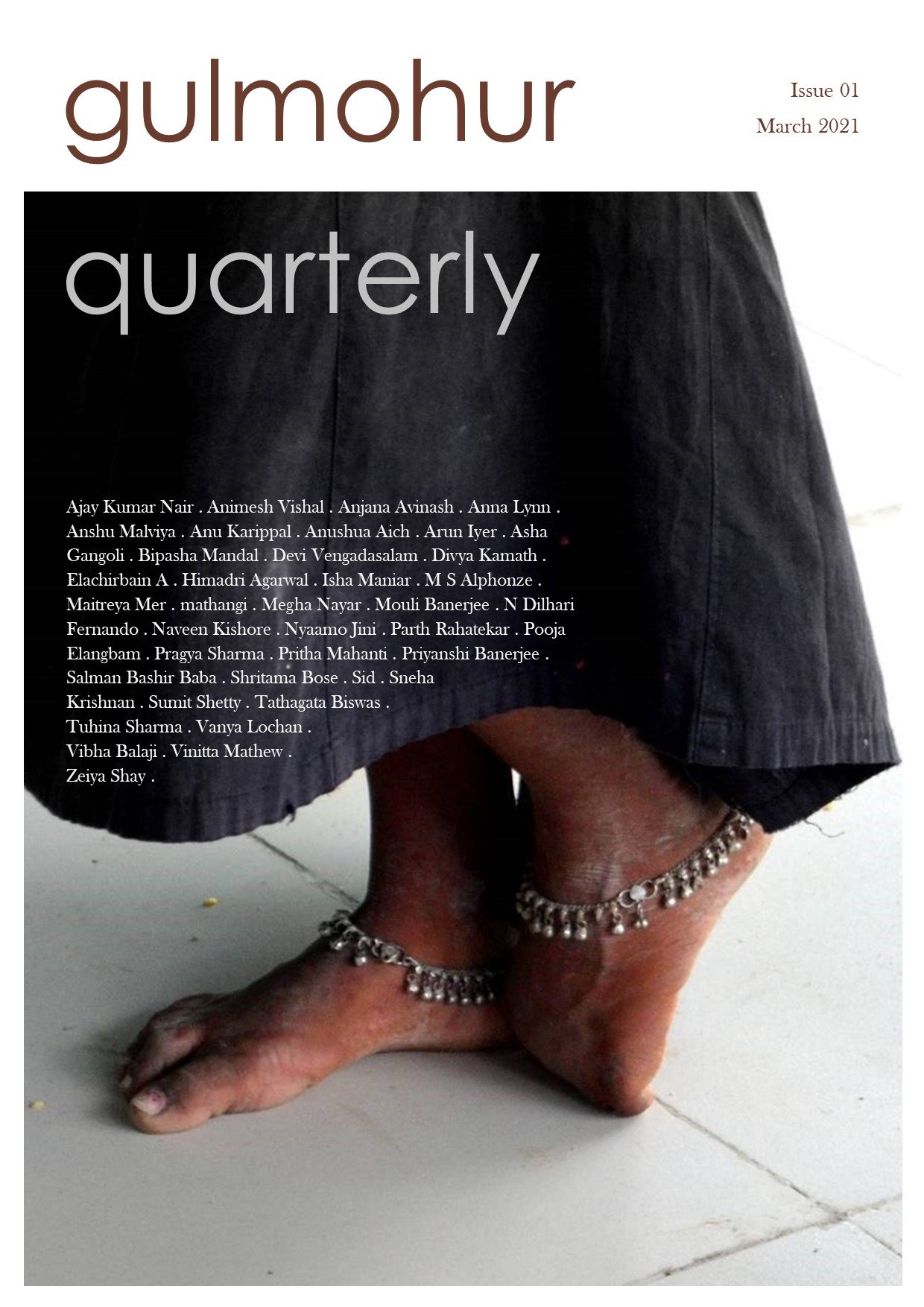 Why do we know certain things and don’t know the others? How do we understand some arts and not the others? What is this ‘otherness’ we either don’t see or find alien and ‘unnatural’? Quite visibly, we have access to or have interest in particular forms of writings: its nomenclature provides an instant grasp of the abstract, words come together like parts of a machine, the engine starts, and we sit in its lap and enjoy the ride. This is what familiarity does: it stations us in its comfortable lap and crops out the rest of the world from our view. We think we know but we cannot think about what we do not know. And isn’t that a calamitous ignorance?

What if the parts fail to communicate with each other, and instead of landing in any lap you find yourself running behind or along with words? What if you don’t really enjoy the ride, what if it discomforts you, makes you question your reality? That’s the literature that addresses or attempts to capture the manifold threads of human thought and psyche and its manifestations as lived experience in a world we all inhabit, but absorb and get absorbed into differently. This uncomfortable ride is precisely what gulmohur wishes to undertake.

A majority never comes to power. Or to put it explicitly, there is no majority. It’s always a powerful minority that captures (but first manufactures) the imagination of a majority and then mobilizes it towards the larger goal it makes them believe is theirs.

This is great literature! This is our great nation!

Both are similar lies propagated by very similar people - the powerful minority, the elites, the bourgeoisie. The essayist and novelist Pankaj Mishra sums it up well: “What we right now need in Indian writing in English, in particular, is a figure like Irwin Welsh who can sort of shake up these very musty protocols, which are essentially genteel bourgeois protocols about how to write; essentially the bourgeoisie, which is very powerful elite in India and that’s the elite that produces what we here in this part of the world know as Indian literature, is actually Indian writing in English and that is produced by a tiny minority of people and it stays very close to certain very conventional notions about India, about Indian history, about Indian society, and I think what we need increasingly are voices that do not subscribe to these notions, that belong to different caste and class communities” (Interview, Hibrow).

The products of English language schooling system are not genetically modified crops with exact sizes and shapes. Most English medium schools in India do not yield people who could write a few grammatically correct lines in English. In small towns, the situation is further abysmal; identified by the degree-holding youth who is not confident enough to engage with literature in their language of instruction nor rooted enough to read in their native tongues. So, the English writing in India fishes its pearls out of a very small pool of historically advantageous ‘caste and class communities.’

If we do a social profiling of major (or even ‘minor’) Indian writers writing in English today, do you think it would throw any surprises? Do you think the homogeneity that stares blankly into our blind eyes in all walks of life such as media, governance, arts, politics, civil society, academia, state institutions, industry, corporate, entertainment, diaspora, left, right, centre, et cetera would not show its sophistication and superiority there? Of course, it would; it would surpass all other segments of Indian society.

“What other world did [the writer] know? What other experience did he bring to his way of looking? How could a writer write about this world if it was the only world he knew?” V S Naipaul framed these existentialist questions for the writer.

A writer is not a poem or a story or an isolated experience. A writer is many voices, a thought system, an institution in themselves. When this is not the case, writers find themselves exhausted after a book or a few stories because they don’t know any ‘other worlds.’ Those who write in English in India often have the resources, education, and the privilege; they belong to the minority that, by virtue of their birth, is placed in that comfortable lap that omits out all other worlds, so many possibilities. Compared to the English writing in India the regional language literature is vastly rich because it doesn’t consist of that minority alone. The regional is a palette of various minorities in India that doesn’t constitute one ‘majority’ but brings the other worlds in forms and shapes unique to their own soil.

Now cup Naipaul’s words in your palms and pour it over the holy publishing world, and ask: what kind of worlds should a publisher bring to their reader?

Literary magazines in the many languages of India have had a long tradition; they have undergone many changes, seen phases of experimentation, and harboured radical, albeit short-lived, possibilities. Apart from the mainstream publications, there have been a number of ‘little magazines’ that became known for their own distinctive attitudes and sensibilities. The literary ecosystem which nurtures these various publications became more democratic, and abundant, with the shift to online modes of reading and publishing in the last decade. The impact of contemporary literary periodicals is difficult to gauge; though it seems safe to assume that there have been and always will be readers of good writing. The forms in which we access these media might change, but the fact of our engagement with the literary remains as profound as ever.

There’s certainly a space beyond the dominion of the mainstream, and it is this space which can be cleared and inhabited to suit our contemporary expressions, it can be cultivated with our sincere commitments, and be hoped to flourish, too. It is in the spirit of this tradition that we conceive of gulmohur to be a thoughtful interlude in the ever-growing commotion of our digital lives. We hope to publish the best and the most promising writings, in the days to come, with an emphasis on excellent translations from Indian languages.

gulmohur wants to bring together voices that occupy fringes and corners, that do not adhere to strict codes and characterizations. In times like ours, where a majority has captured the spotlight and the rest have been pushed into oblivion or labelled irrelevant or illegal, the matter at hand becomes more pressing. It becomes a collective responsibility to stand against the self-proclaimed guardians of culture and history and challenge their authority and monopoly over texts, peoples, and the nation.

Our first issue brings together a range of writings. Amongst the perennial themes of literature, you’ll also find in these pages a literary documentation of recent events: as you’d expect, there are writings on the pandemic, the isolation of the past year, the switch to online modes of interaction, the harsh migration of labourers to their ‘homes,’ and on a physiognomy of the pandemic in modernist art; there’s an attempt to grasp the social dynamics of the ‘new India,’ where hate proliferates our political dreams and makes us play their game by their rules; a poet records the crackdown on universities and asks if we were troubled by the Delhi riots; there’s a short, chilling account of the constant anxiety in which the people of Kashmir live; there’s also an allegorical dialogue on this fire that’s engulfing us (or is it a ‘soothing stream of water to put out the real fire?’). There’s immense turmoil around us and some of these writings make a truthful attempt at grasping the mechanisms and implications of these events.

There are writings which explore the social inequalities: a poet describes the abject reality of hunger, and hopes for a dream of possibilities; women boldly write of the horrific tyranny of patriarchy exercised through the ‘noble’ institutions of marriage and family, of their daily encounters with violence and humiliation in a world of men, of their resolve to see through this orthodox, patriarchal farce that regulates their bodies and minds; an essay explores Manto’s women and their sharp responses to the society’s filth and grime; a poet urges you to, hypothetically, ‘lower your caste/ lower/ lower/ a lot lower/ than what you are comfortable with.’ There are deep, personal accounts of desires, conflicts, realizations; and a struggle to grapple with that which eludes us in our most intimate moments. There’s also a curation of translated poems introducing us to the enormous poetic world of Jibanananda Das.

gulmohur stands in solidarity with the farmers’ movement against the farm laws; the movement against CAA; the many arrested journalists; the jailed activists and intellectuals of the Bhima Koregaon case; the victims of caste and gender violence; and with all those who dissent in the spirit of democracy to safeguard our ever- diminishing freedoms.

We are extremely grateful to Arun Iyer, Naveen Kishore, and Tathagata Biswas for trusting us with their writings. We would like to acknowledge the help we received from people in reaching out on social media. Our sincere thanks to Arunava Sinha, Orijit Sen, Janice Pariat, Jenny Bhatt (@desi.books), Meera Ganapathi (@soupgram), Rohini Kejriwal (@thealiporepost), Rahee Punyashloka (@artedkar), Open Call India, @smishdesigns, and The Bombay Review. We also thank all our friends who helped us spread the word and get such an overwhelming number and range of submissions in the last three months. We’re thankful to all those who made submissions, too.

The last section of the magazine contains brief notes on our contributors. We’ve mentioned their emails alongside; so, feel free to write to them if you happen to like their writings. It is often a good idea to appreciate and encourage. You can also write to us at gulmohurquarterly@gmail.com and give us your valuable feedback and suggestions. We hope you enjoy this first issue!